Drive to Neilrex by going South on Binnia Street, turning right on Queensborough Street.  You will pass Queensborough Park on the left with its rotunda over 100 years old, and go through the Coolah Common, established in 1875.   You will ascend a fairly steep hill which in the past hosted hill start car races, and near the top you will see Mt. Hope Road on your left.

While our drive bypasses Mt. Hope Road, this mostly unsealed road goes through to Dunedoo and affords the passengers some lovely views from its heights to the south east of the Coolah Valley and to the north of the Warrumbungles.

Continue on the Neilrex Road and descend the hill, continuing on.  On your left you may notice a property named Moorombi.  Farmers may recognise the name as its owner bred a certain kind of wheat called Moorombi.   Historically, this area was the subject of news in 1875 when the highest priced horse ever imported from England (a two thousand guinea blood horse) was stolen and hidden in the pine scrub nearby (through Moorombi to Cloven Hills).   It was never truly found however it was rumoured to have been moved to Queensland and some years later a great improvement in horseflesh was apparent around Longreach in Queensland!

Continuing on, you will see an aircraft sign and the Coolah Aerodrome is situated down the road to your right.  Construction of the airfield began in 1954 and it was first serviced by Butler Airlines.  The service was by Heron aircraft twice a week to Sydney with a single fare of four pounds.  Regular services ceased in 1967.

A sign to your right a little further on is “Doganabuganaram Rd”.  Local legend claims it was named by a surveyor working in the area who had to share his camp with a dog, a bug and a ram!

Also on the right you will see a property named “Butheroe”.   This property was established by James Vincent, in the early 1800s, purportedly the first white man near Coolah.   James arrived from England in 1801 and proved to be a keen explorer, having Mt Vincent near Lithgow named after him.  Butheroe at the time was a huge tract of land and included the more recent properties of Mumbedah, Digilah, Moggee Hill, Dennykymine, Moorangorang and Queensborough.   Butheroe means ‘waterhole’.   In these early days, supplies only came to the Station once a year and when a beast was killed for meat the aborigines were given half of it.  As there were no fences, the sheep were minded by shepherds who lived in little huts, usually with a dog or two and had rations delivered to them weekly.   One shepherd on Butheroe stayed for 47 years!   Geologically, a deposit of slate was near the original homestead (which burned down in the 1880s). 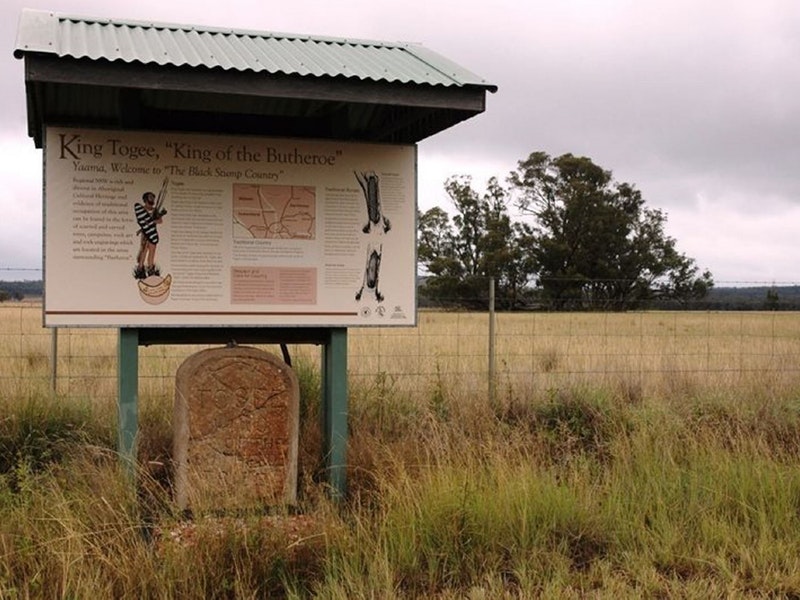 On your left you will see a spot to pull over and an information board (see photo above).  This is the headstone of King Togee, head of the Butheroe tribe of aboriginals that lived to the east of this area.  A tall, strong man, he was skilled with spear and stone and the settlers in the area found him honest and trustworthy.    The Nevell family of Butheroe made a brass plate for him with “King of the Butheroe” tribe inscribed, which Togee wore with pride.   When an older man, he was speared by a young tribesman, Cutterbush and died.  The Nevell family buried him and had a headstone carved by a stockman on the property, to mark his burial.   When his tribe learned of his death, they plastered their faces and bodies with pipe clay and disappeared for 3 years, reportedly in mourning.

Continuing on, you will shortly come to a short stretch of unsealed road approximately 6km long.  Please note that it can be slippery in wet weather.

A little further on is the village of Neilrex.  This tiny settlement was named initially for the railway siding “Lochneil” but became Neilrex for its links to the existing siding and to honour local resident Rex McNeil who with his brother John had the nearby property Lochneil and Biamble in the early 1900s.   Rex served in WWI with the 1st and 12th Lighthorse regiments seeing active service at Gallipoli and the Middle East.  He was wounded at Gallipoli but never fully recovered and died in 1935.   His brother John also served with the Australian Lighthorse.

Neilrex still has a few residents, an operating silo and railway siding.  If you take the left turning towards Merrygoen, you will see the hall, church and old clay tennis courts that give an indication of a once thriving village.

If you would like to continue to another small village, follow the left hand turn (signposted) to Merrygoen, 16km away.  This road mostly follows the rail line and goes through some very pretty farmland.  Of interest a few kilometres down this road on your right (next to the roadside), is an old shearing shed, shearers quarters and meat house in good condition.  Biamble Station, situated between Neilrex and Merrygoen was once the home of Robert Hamilton Matthews a renowned anthropologist. His son Hamilton Bartlett Mathews was born here and became Surveyor General of NSW and his other son Gregory Macalister Mathews was a famous ornithologist.

Merrygoen was settled around the 1840s and the name is believed to have come from the Aboriginal word, Murragon-gon, meaning ‘bloody waters’ after a tribal battle where the creek water ran with blood.   In the 1860s “Granny” Richardson ran the old Merrygoen store and the Squatters Home hotel.   Eleven Richardson headstones can still be seen in the Old Merrygoen Pioneer Cemetery.   Gold was found in Merrygoen and Ukebung Creeks in the 1870s.

When the railway was being built, Merrygoen gained a new hotel (aptly called the Railway Hotel) and on one festive day in 1912 cars were parked three deep at the hotel.    In 1915 a newspaper article mentioned numerous assaults and robberies in Merrygoen by railway workers who were Sydney ‘confidence men’ and ‘crooks’, necessitating a temporary police presence in the town.   Merrygoen also had a turf club in the late 19th century, a post office opened n 1879 with a mail coach passing through twice a week, and a school in old Merrygoen from 1867-1914 and in new Merrygoen (nearer the railway line) from 1915-1969.   The railway station is now closed but is still standing.  The railway sidings and wheat silos are still in use.

Please note there are no stores or cafes in either Neilrex or Merrygoen.

More history on Neilrex and Merrygoen can be found in the book “Around the Black Stump” by Roy Cameron, a copy is available to view in the Coolah Library.

Coolah Historical Society was established to research and preserve history related to Coolah and district.

We are also happy to assist with genealogical enquiries.