This article from 1906 relates a journey and holiday to the Coolah district and with a particular destination of Norfolk Falls.  Starting at Cassilis township, it gives a great picture from 114 years ago! 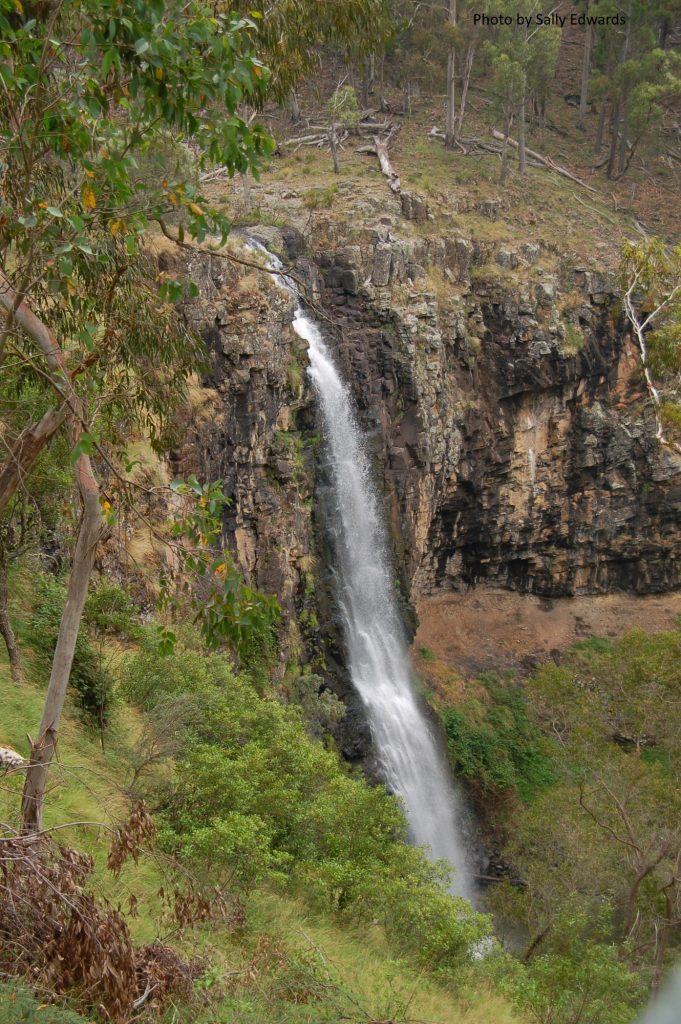 From the Merriwa Cassilis Standard, 27 October 1906

Oft during the past dozen years had I heard of the wonder and beauty of the Norfolk Creek waterfall – the most majestic of the many cascades that make music in the hidden places in the Liverpool Range; but not until Michaelmas week was it vouchsafed me to visit this silver singer of the hills. We reckoned upon the creek, as a consequence of recent rains, containing a good volume of water to add to the grandeur of the spectacle, and the weather being intermittently favorable we made preparations for a few days camping out, and sallied forth a party of a half dozen, well mounted and equally well found.

Starting from Cassilis in the brilliant sunshine of an ideal spring morning, we made our way through Llangollan, now “green with the garland of spring” and arrived at the residence of Mr. Ambrose Lovegrove in time for midday lunch. Five miles further up the course of the briskly flowing Cooba Bulga Creek we came to Mr. H. Stents homestead, where reinforcements were expected. Here our pilot suggested a dash across country to Rotherwood, through Mr. Geo. Piper’s country and some station paddocks. Several of the party carried rifles, and kept sniping at hares and rabbits and whatever else in the way of lawful game presented itself. It was well for a dozen or more monstrous kangaroos seen in a paddock en rout and some black ducks quietly swimming in a creek that the shooters were cognizant of the scope of the Native Animals’ Protection Act and conscientious enough to observe it.

It will thus be seen why the sun was in his evening declination when we reached Rotherwood. We still had time however to get some miles nearer our objective before nightfall.

The whole country hereabout presented a wondrous wealth of grass and herbaceous growth, which promised well for our horses when camping hour arrived. It was twilight when we reached Warung, the property of Mr. Arthur Exley, situated on the perennially flowing Bounty Creek. In the foregoing, and in common usage, Norfolk Island Creek has been denominated simply Norfolk Creek. We were at the time in county Bligh.

Now it does not require much power of mental association to connect these different appellations (Bounty Creek, Norfolk Island Creek, and county Bligh) with a stirring historical episode in which an early Governor of New South Wales was a central figure. The nomenclature would give a local school teacher a splendid opportunity for the correlation of subjects. Our company, though armed cap-a-pie and attended by many evidences of hostility, did not appear to in any way terrorise the peaceful inmates of these hospitable homes when making our irruption upon them. Perhaps the black tracker driving our sumpter beast lent the party the air of a troop of police in hot pursuit of sheep stealers; but the firearms prominently displayed would negative such a theory. The scene would better synchronise with the days of terror following the Governors atrocities. In any case, Mr. Smith’s large camera looked suspiciously like a maxim gun of diminutive size. Albeit Mr. Arthur Exley, like the other folk encountered, attached no hostile significance to our unexpectedly looming upon his horizon. A few words sufficed to lay open our cherished scheme and to enlist him as a “guide, philosopher, and friend” for the morrow. This was a good bargain, for all the rest were on strange country, and none new the tracks to the falls.

Refusing proffered hospitality, we went into camp for the night after turning out the horses in a paddock of handy size near by. This was the piece-de-resistance. Can I ever forget the unwonted zest of kindling a cartload of firewood, of hungrily partaking of the plentiful and varied provision laid out in the ruddy light of the crackling blaze; of afterwards strewing a leafy “doss” whereon to spread the bedclothes, and, as climax to all this novelty, of sleeping in the open dewy air, with the feet to the said fire, and nothing to prevent the stars from twinkling on the sight or to keep the copious dew away.  One of the Adventurers cried “Hold, enough,” as the fifth great log was being launched for immolation; but at each cockcrow the same man was observed to be afoot busily reviving the waning fire, and apparently very cold.  No wonder, for winter lingering of chills the lap of September in these mountain regions.  I shall always after this experience commend the wisdom of the tramp in plucking fallen bushes for his winter lair and not as in the past think it consummate folly.

A steep hill of the width of three quarters of a mile separates Mr. Exley’s Home from the Turee Vale homestead, situated on Norfolk Creek, about 6 miles from the falls.  Next morning, stringing down the declivity in Indian file, our guns bristling formidably, we passed before the “white-upturned, wondering eyes” of the station employees, and picked up the merest vestige of what was once a well used bridle track to Yarraman.   It took up, up, for ever so long, over stony, rugged ways, abounding in imminent perils to life and limb every few yards apparently.  We reasoned that it was as much to our horses’ interests as to our own for them to stand upon their feet in such precarious situations; also, that it is seldom one hears of serious mishaps befalling horsemen daily utilizing these fearful paths.  Thus heartened, we toilsomely ascended.

The plateau was at length reached, and splendid country it was found land whose inaccessibility alone could save it from being exploited by the earth-hungry.  Broad, rolling downs of rich chocolate soil, clothed with forests of excellent stringy bark and here and there clumps of flowering wattle and mountain heather, extended on either side.  We crossed a large improvement lease, mostly of this character, and wondered where was the wisdom in locking up under such tenure for 28 years’ territory so naturally favored.  The whole range top, consisting of thousands of acres, is of similar formation, and awaits profitable occupation after the vast wealth of timber has been destroyed (ruthlessly, no doubt) in order to sweeten the herbage.  Here where the air a-scent with the subtle perfume of the wattle and the mountain birds sing their “wild notes free” one is puzzled to know what A.L. Gordon meant when he sang of ours as a land of scentless blossoms and songless birds.” But perhaps he was homesick.

Our pathfinder soon took us to the brink of a canyon, at the head of which gleamed far and faint the marvel we had traveled 24 miles to see.  Pursuing our uneven way, we could dimly hear after a while the thunderous torrent, and at length we were abreast of Norfolk Falls in all their grandeur.  Before dismounting to examine the majestic scene at close quarters, we must perforce subject ourselves to the camera fiend; from whom we might here reasonably have expected to enjoy a blessed immunity.  Just as we arrived, then, our horses lazily standing in the pellucid stream, and Edgar, our sable attaché, occupying a not inconspicuous boulder, we were photographed – “blessed be the art that can immortalize.”  Our amateur artist afterwards took several views from different points of vantage, and when executed the pictures will no doubt prove worthy of the attractive scene.  They will also serve to make the falls more generally known, for they had not been previously photographed, it is believed.

None of us were prepared for so sublime a spectacle as met our gaze. The far famed Leura and Wentworth falls sink into insignificance in comparison.  The creek was flushed with previous rains, and a fine body of water took the awful leap of 150ft, to transform itself into a sheet of silvery spray 25 or 30ft wide. Yes that appears to be the height of the abyss, and Mr. Exley informed us that by the aid of a rope its altitude was approximately gauged as such by him and his brother.  It certainly only lacks great volume of water to become one of the marvels of New South Wales.

In dry seasons only a trickle can find its way over the precipice; but in flood time what a stream disports itself and “no eye sees”!  Here it is not a succession of leaps aggregating an immense height, as in some widely known waterfalls; but a bold cataract hurling itself from the topmost brink and only impinging itself on the inner surface against the vertical wall near the foot.  The view from the bottom to the top is perhaps the finest.  One is fascinated to the spot and lost in admiration as at the top a feeling of dread and dizziness comes over the beholder.

Beneath the wet, dripping walls at the foot extend deep caves, where it is evident the kangaroos nightly make their lair.  In accordance with custom we wrote our names and deposited the records in the crevices of the rocks. Mr. Bill Winner, who professes to know the falls in their every aspect, told us that at a certain hour in the afternoon the refraction of the sun’s rays cause the formation of the spectrum, or rainbow phenomenon; but though some of the most enquiring and curious amongst us tested the ability of the sun in this respect, we were not rewarded by observing prismatic effects.

That night we slept in a commodious wool shed, with abundance of wool packs and full-wooled sheep skins to make soft our beds.  Not all, for, said Edgar, true to his racial instincts, “give me the fire before all your wool and bags.  You white fellow’s bally fools last night.  You make big fire and could not get near it.  Black fellow make little fire and curl up close to it.”

En route home next day we examined a grave near Rotherwood homestead of which we had heard.  Its fallen headstone was not with “uncouth rhymes and shapeless sculpture decked to implore the passing tribute of a sigh,” but bore the following legend, neatly engraved: “Sacred to the memory of Anne Jane McGowan, who departed this life at Rotherwood on the 22nd April, 1849, in the 29th year of her age.”  That event took place nearly 58 years ago.  What a transformation of scene to-day compared with that of those primitive times when this young woman, dying in her prime in the remote wilds, was not consoled perhaps by the presence of another white woman.

Picking up the main road to Cassilis, we briskly traveled the 12 miles intervening in time to make the depletion of our commissariat reserves a matter of no consequence.

This information was contributed by Noel Gilbert of the Coolah Historical Society.  Noel is a descendant of Anne Jane McGowan, whose headstone is mentioned in the above article as being on “Rotherwood”.  The McGowans came from North Ireland to the Hunter Valley region in 1841.  Her husband, Hugh, was manager of Rotherwood in the 1840s .